posted by Kareema Ali 6 years ago in Round-up 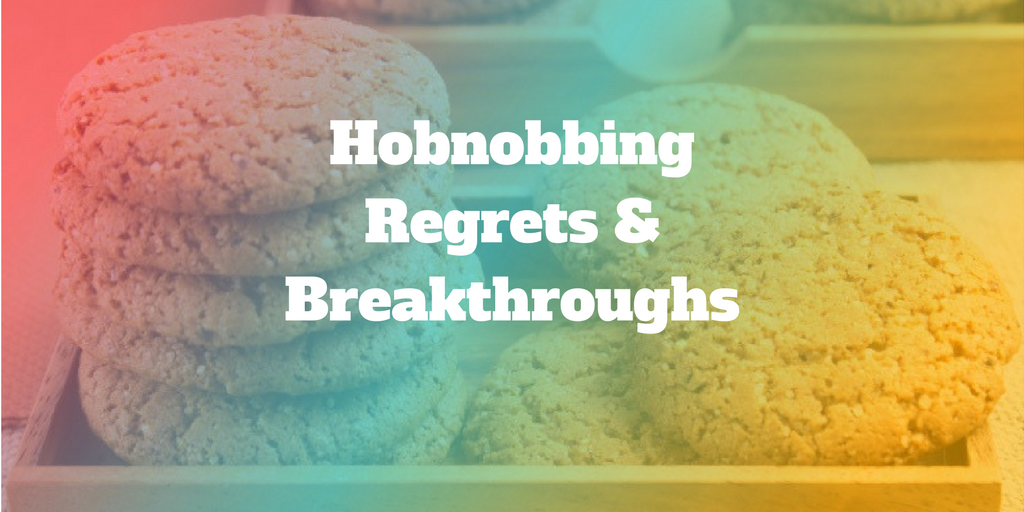 As the year comes to an end, let’s reflect and look back at what our Hobnobber’s said about their biggest regrets and accomplishments!

“A globally curated marketplace that connects the world with handmade fashion accessories.”

What is Lewis’s regret?

“The main regret I have is not doing this sooner. The idea actually came to me nearly 4 years ago. I had done nothing about it for the first year, I’d say due to fear really, I was kind of scared at failing my first proper business and put it off.”

But, what was his breakthrough moment?

“I would say things really started happening in December 2015, I had a lot more time on my hands which meant I got to focus on designer and customer acquisition in more detail.”

“Beeline make beautifully designed navigation hardware and software to make getting around on a bike much easier and more fun.”

What is Tom’s regret?

“You know I really can’t think of any. Maybe that’s a requirement to staying sane as an entrepreneur – blocking out all the bad decisions you’ve made! I can certainly think of a few close calls where we almost got things very wrong, but fortunately, I think we’ve erred on just the right side of screwing up so far. Touch wood!”

And his breakthrough moment?

“The obvious big one was launching on Kickstarter. Although a lot of work had gone into it before then, this was the big moment where we exposed what we were doing to the world and found out if anyone would like it! Fortunately for us it went really well with over 1000 people pre-ordering within a couple of days. That was when we knew we were on to something worth pursuing.”

“Banana Moon is a personalised clothing company. We print and embroider onto a wide range of clothing items for colleges, universities, large businesses, small businesses.”

When asked, ‘Do you have any regrets?’ Alex responded with;

But when he was asked “Has there been a breakthrough moment?” He replied with;

“Without doubt our first E-commerce website in 2005. In the early days of e-commerce, this was a sterling effort and helped to put us on the personalised clothing map.”

“FilmDoo is a global, online movie-streaming platform helping people to discover and watch great films from around the world. In many ways, we are a “TripAdvisor for film meets iTunes”, so a one-stop platform combining movie discovery with content access.”

We asked Weerada what her regrets are and she responded;

“On this journey we’ve met a lot of people who turned out to not be as fully committed to what we’re doing and some who ended up wasting our time. So while I don’t have any regrets starting out on this journey, some mistakes have been made along the way and I regret not being more clear with my time, cutting out the negativity and those are who are not as dedicated or lack integrity, associating more with people who have achieved or share goals similar to what we’re trying to achieve, and who will really be there for us on every step of the way.  My father once said, “If you want to make a million dollars, don’t talk to someone who never made a million dollars.” So it helps to surround yourself with people who’ve done it before and can help inspire you to achieve your dream.”

We then asked about her breakthrough moment to which she said;

“Back in 2013, I was with my best friend and now co-founder William, who’s also a big fan of international cinema. We wanted to see this big South Korean film called Masquerade that grossed US$80 million at the Korean box office but it couldn’t be seen anywhere in the UK at the time and we didn’t understand why. So William, being a lawyer, looked into it and discovered it was actually a legal problem. The film distribution industry is one that predates the internet, it’s multi-layered and lacks transparency. In this age of digital innovation, we believe that films like these should be accessible and discoverable.”

“Fruity Beauties are a juicy start-up venture, striving to bring refreshment, revitalisation, and rejuvenation to the nation!”

“No real regrets, we’ve certainly made mistakes along the way but these ‘mistakes’ have taught us a great deal and have definitely guided the direction of the business, made us more savvy in the process and helped us to grow organically.”

And her breakthrough moment;

“I am an avid festival goer and love not only all the fun of the fair but also appreciate the diversity and creativity that not only stimulates your senses but also fosters a mindfulness and appreciation of the rich and varied nature of identity.

“I knew that we could use this inherent awareness to build a brand that conveys these qualities and wanted to create a product that would refresh and revitalise festival goers with added nutrients to keep them going.

“The ice pops fitted the bill nicely so we set about putting the wheels in motion!”

“We’re a contemporary, London-based, multi-channel craft and haberdashery business for both modern makers and textile professionals. We have an Ecommerce Business, a High Street Shop and a Textile School which form a vibrant, creative hub through which we engage with our 14,000 strong registered global customer base.”

Nancy reveals her biggest regret is;

“Only that we didn’t set up the shop and textile school sooner! The combination of e-commerce business, High Street Shop and Textile School work seamlessly together, supporting and complementing each other. It’s a great business model and it’s given us enormous scope for growth.”

However, her breakthrough moment at Fancy Moon has been;

“There’ve been several! In our first year of trading we reached online sales takings of £14.5k a month (which was a lot to deal with from the kitchen table!) so we soon had to move the business into a fulfilment space.”

Being featured in Vogue, The Independent on Sunday, Living Etc, The Evening Standard, and receiving fabric orders from The Royal Opera House, Sadlers Wells, Glyndebourne, and London School of Fashion – you really feel like you’ve been noticed and people like what you’re doing.”

Introducing the new key business players
What might Trump’s win mean for UK SMEs?
Spring Budget: what it means for SMEs
What are politicians promising SMEs in the run up to the General Election?